Beginning of Bosco. The aliens (Frakas) land on an Aztec pyramid.

Here is a young Triops swimming around his (or her) tank. The hatching rate of Triops is very low compared with Sea Monkeys. Out of half a packet of Triops eggs, only 6 hatched, and only 4 grew to the visible-to-the-unsquinting-eye scale. The other day (Saturday), I moved the 4 remaining Triops to the big 2.7 Gallon tank, but now only two are left. These are the biggest ones, one of which can be seen swimming around in the video. The others didn’t get sucked up into the pump intake (I checked), so I assume the biggest guys were busy snacking on their cohabitants overnight.

I also moved all of the Sea Monkeys into another 2.7 Gallon tank (this one with salt water). I love the wee beasts, and think they’ll enjoy having more room to swim. Well, also, they’ve been getting it on all week, and the females are now berried. Not sure what they’ll decide to do and when, ie., lay eggs or spawn live young. It is probably too cold in the tank (72 F) for them to spawn, though.

My Holy Grail (for the freshwater tank, at least) is to get some Red Cherry Shrimp. The tank is way too small for even five of them, but the water quality so far is good and there are lots of plants to take care of the bad gunk that builds up. Currently, I’m waiting on a corner filter to arrive to start cycling the tank in preparation for these things.

Because I can’t stop at just one…

News of the Shrimp World!

1. The Barnacle was released safe and sound back on Ocean Beach.
2. Triops (square tank on the far right) have hatched, but they’re quite small for now, so I didn’t take any closeups of these guys. There are about five of them in there.
3. The Original Shrimp People of the first colony are doing well. They’ve grown to their adult size, and the males have hilarious looking mustaches.
4. This week, I populated the freshwater tank with a Golden Mystery Snail and a Nerite Tiger Snail, and added some plants (Java Moss, Java Fern and err… I forgot the name, the things that look like horsetail ferns.) 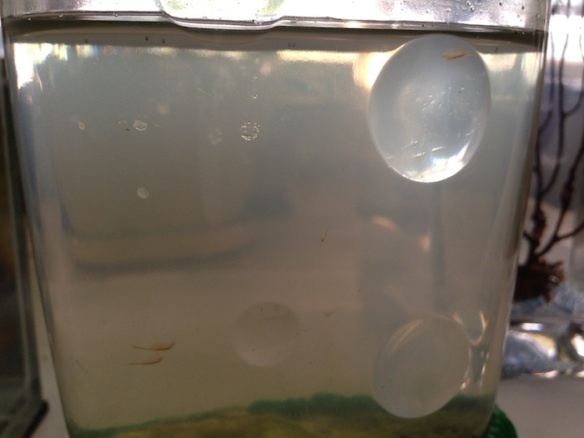 Below: Tiger Nerite Snail: a slow poke, not very dramatic to watch, likes to hide behind rocks and things, spends long hours sleeping.

Golden Mystery Snail munching away on the tank wall:

Sea Monkeys swimming around (the remaining citizens of Colony #1): 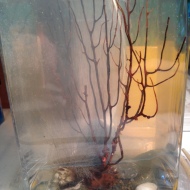 I’m going to say that all of the events I’m about to describe are pure fiction and never really happened (I wish).

So, this past weekend of Friday 13th I picked up a barnacle on Ocean Beach. I thought it would be a great addition to my brine shrimp tank, but I was wrong.

First, before placing it into the tank with shrimp, I did a bit of research to see if barnacles are carnivorous. It turned out that they’re not. They’re filter feeders, related to shrimp, and they eat by filtering out small particles out of ocean water with a little ‘tentacle arm’ [cirri] that is actually their foot. My research also told me that they’re OK to keep in fish tanks. The only problem is that they like to eat a LOT, so manual, localized feeding is recommended. Good, I thought, and dropped the barnacle right into my shrimp tank, which contained a few grown shrimp and lots of shrimplets at this point.

At first, all went well. The barnacle opened and closed its jaws and siphoned its food. The air pump kept the water circulating nicely, and the little barnacle monster (a cluster of 7 of them, actually) seemed pretty happy. After a while, however, I noticed that of all the shrimp were missing. I looked and looked, but couldn’t find any shrimp at all. They weren’t feeding on the bottom of the tank, nor were they swimming close to the surface. I began thinking like a shrimp, and it occurred to me then that if I were a shrimp, I’d be interested in grazing on the barnacle’s branch-like things that look so pretty underwater.

Sure enough, I saw several Sea Monkeys there, but they weren’t grazing. They were caught, hopelessly caught in the branches of the barnacle’s “tree”. They were trying their best to swim away, but they couldn’t. I managed to free one shrimp by wiggling the “branch” around with a wooden stick, and released it into another tank.

So, what happened was that the air pump created a nice current, which circulated all the shrimp through the barnacle’s “tree,” effectively trapping the entire little shrimp colony for the barnacle to slowly feed on their remains later. Did you say barnacles don’t eat shrimp?

I took out the barnacle and transferred it to another tank. This was going to be a shrimp tank, dammit, and without much thought, I transferred about two thirds of my main shrimp school into the tank now vacated by the barnacle.

Unfortunately, soon the shrimp in this tank began to behave very strangely. They slowed down in their swimming, as if something was preventing them from moving, and hung in one place, moving their legs but not going anywhere far. Then they began to sink to the bottom of the tank, and die. By morning, there wasn’t a single shrimp left.

My journal entry for that day reads:

Oh god I killed all the shrimp in the big square tank with the Barnacle.

It was quite a depressing sight. Since there were no shrimp anymore, I put the barnacle back into the tank. In about a minute, the current from the pump brought all the dead shrimp through the barnacle’s “tree” and it is currently eating what’s left of my original shrimp colony. The good part is that there are still some shrimp left in the smaller tank. Below are some photos and a video from this very fictional story.

It started all so well…

Clear water and a few shrimp, most of them still unhatched at this point.

I added the Barnacles.

The shrimp have gone missing.

Here is a closeup of the “tree” that grows on and around the barnacles. The branches capture small prey. Like shrimp.

Above: what remains of the first shrimp school. Not a lot. On the right is a freshwater tank, where Triops are hatching. If they hatch, I’ll post photos of these guys too. And, lastly:

After about 12 days, I can finally see them!

I believe that up close, they look something like this: 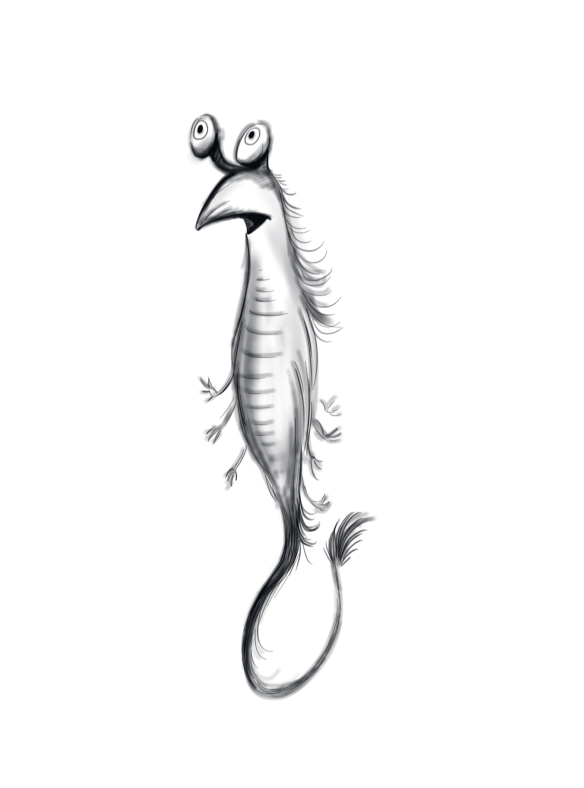 Sea Monkeys – added into the tank on 3.30.18, first monkeys hatched on 4.1.18. By next week, I expect them to develop a fully fledged, utopian society.